Sometimes Chinatown feels too far away if you live north of downtown so it’s nice to have other options for delicious Chinese food.  I don’t think Chinese food gets the appreciation it deserves and seems to be overshadowed by Thai and Japanese cuisine, which are of course all delicious.

Unfortunately, Chinese food has been bastardized in our culture as something you just get for “take out” and is not recognized as a true culinary delight.  Chinese cuisine is extremely diverse and rich in flavors and sauces.  In fact, it has some of my most treasured sauces such as Mapo sauce used for Mapo Tofu.

I had been wanting to try Imperial La Mian for quite awhile as I’ve seen it recommended in food blogs but was reticent as it’s located in River North and I don’t really enjoy River North vibes.  I am willing to brave River North for delicious food though.

Upon walking in you are greeted by the hosts and there are two separate areas, one is kind of separated from the rest of the restaurant with brighter lighting and families (didn’t want to sit there) and another area is more open, dimly lit, and by the bar (much better choice).  It was a busy Saturday night and we had reservations so we were sat down almost immediately, which I appreciated.

The service was excellent.  Our server was very helpful with the menu since a lot of dishes had pork/meat in it even if it wasn’t stated on the menu.  I was a bit frustrated that so many dishes had meat in them to the extent where the entire XIAO LONG BAO menu wasn’t safe for us.  They also put pork in things that didn’t necessarily need it like the calamari sauce.

So I was a bit frustrated about the lack of vegetarian and pescatarian options, especially since it wasn’t a super small, family owned place in Chinatown.  But when in doubt, just go with sake to start your night off.  They do have quite an extensive cocktail menu but I was craving something more simple and purer like Sake. 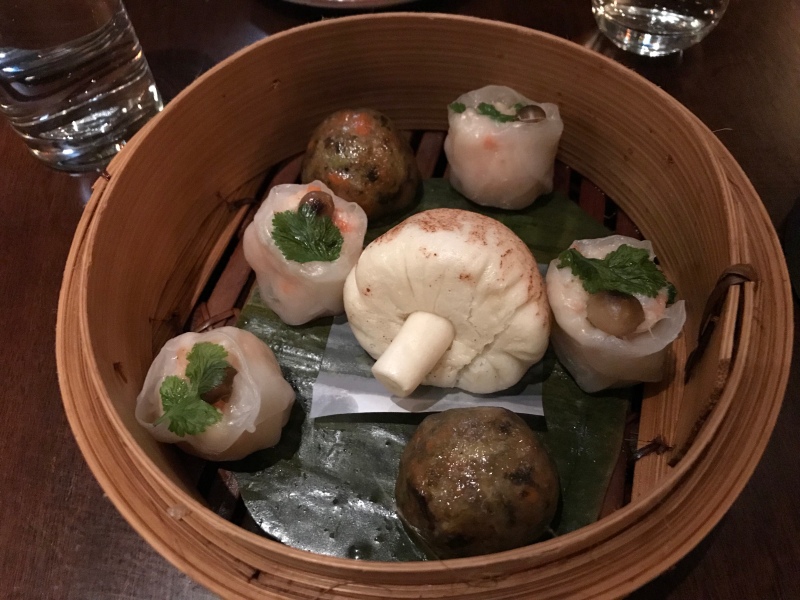 We started off with the salted egg green beans and some dim sum.  Now I know that green beans doesn’t really sound that exciting while eating out, especially because I make some delicious green beans at home.  But these went far beyond my expectations.  The server had recommended them so I thought why not?  They were green beans coated in egg yolk, salt, and tempura flour.  They were so flavorful and crunchy, quite a savory delight to open the meal.

The dim sum options had meat in them but they were able to accommodate our diets and make them vegetarian by substituting a meat dumpling for a vegetarian one.  So we had the steamed basket, which was quite good.  Nothing blew my mind or tasted amazing as the flavors were quite subtle and they didn’t serve a sauce with it.  One of the dumplings had mushrooms and truffle in it, which was really delicious.  I just wish for $12 for 7 dumplings we had more of it.  The dumplings themselves tasted very fresh and had an excellent, soft texture.

Considering that they make their own noodles, we decided to get the vegetable pan fried noodles (wok fried la mian).  The noodles were fresh and tasted like they were made in house.  The sauce was a subtle soy sauce, but very tasty and the vegetables were crunchy and prevalent throughout the dish.  It truly tasted wok fried.  We also got the crispy prawn entree, which was interesting and unique with the wasabi aioli, mango and passion fruit.

The prawns were breaded in a coconut batter and served with the fruit.  It all had an intriguing flavor, but I’ve never been super into fruit in a savory dish and was a bit underwhelmed with this entree.  It would have been nice if the prawn entree had more than prawns and a little fruit in there, especially considering it was $23.  It just wasn’t a very exciting dish. 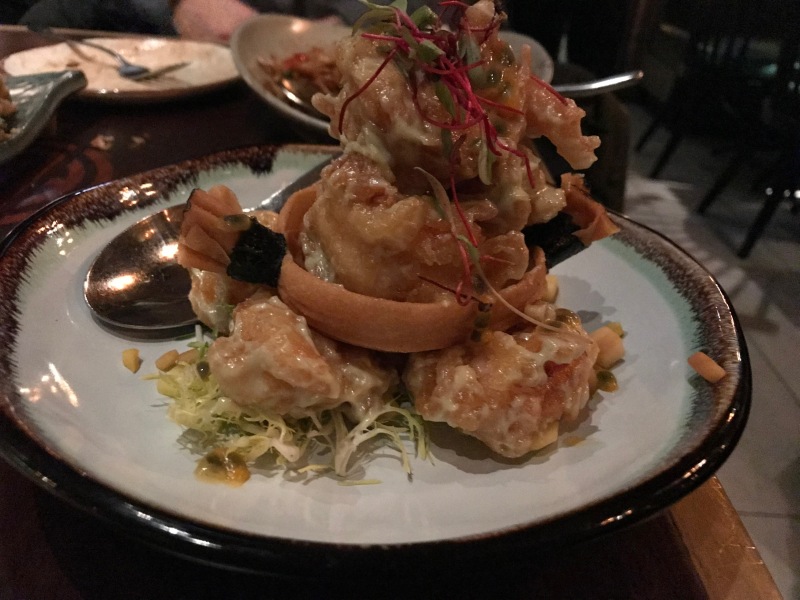 The dessert stole the show of course and they know it did.  There were plenty of unique options on the menu but we got the lunar blossom.  When they present it, it looks like a big white, chocolate shell, then they pour hot chocolate fudge over the shell, it collapses, and you see the inside which has a ginger molasses green cake with vanilla bean gelato on top and whipped cream.  It is quite decadent, but it was a celebration so why not.

I’ve also never seen a dessert like this before so I wanted to take advantage of such an opportunity.  The white chocolate shell and the chocolate fudge with caramel were basically a party in my mouth paired with the refreshing vanilla bean gelato and lighter whipped cream.  The ginger molasses cake absorbed the gelato and the whipped cream well while providing a less sweet flavor to a very decadent dessert.  It’s green appearance added to the beauty of the dessert.  I didn’t really taste the ginger that much because the other components were much more dominant though.

Check out the different phases of the Lunar Blossom and check out @chivegpesc on IG for the full video:

All in all, I am happy to have finally tried Imperial La Mian.  They could be much more vegetarian/pescatarian friendly as it’s in River North though.  The atmosphere is better for a friend/casual date rather than an intimate dinner since it’s a bit louder in there.  If you’re looking for contemporary, eclectic twists on Chinese cuisine, then this is definitely a place worth trying.

This site uses Akismet to reduce spam. Learn how your comment data is processed.

I have been a vegetarian for over 10 years for ethical, environmental, and health reasons. Becoming a vegetarian inspired me to learn how to cook so I could make delicious and healthy recipes...